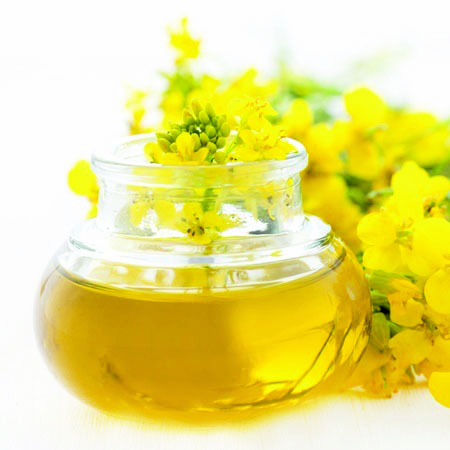 Canola has been around since the 1970s and throughout this time it has received quite a bit of notoriety. As with so many foods today, depending on who you talk to or what sources you read, people have varying and sometimes opposite opinions on whether something is healthy or harmful.  Canola is one of those foods. Unfortunately, some of the controversy that surrounds canola is misleading and clouding the issue, which makes it difficult to make informed choices. In order to understand canola, we first need to dispel a couple of myths that are false and misleading.

Canola is used to make mustard gas, a poisonous gas used during World War I.

Canola is not and has never been used to make mustard gas. Some people have erroneously associated plants from the mustard family, like rapeseed (the pre-curser to canola,) as the base for poisonous mustard gas, but it’s not true. Mustard gas is synthetically made from chemicals including sulphur-dichloride and ethylene. Due to its yellow-brown color and unique garlicky/mustard smell, it was dubbed “mustard gas.”

Canola is not a plant.

Canola is the name given to a hybridized rapeseed plant and the name has to do with the amount of erucic acid it contains. Canola is short for 'Canadian oilseed low acid' and is the product of hybridization, not genetic modification. It was developed in the 70s to reduce the erucic acid, a mono-unsaturated fat that some find unpalatable and that causes digestive problems when consumed in high concentrations. Canola oil contains less than 1% erucic acid and has a different fatty acid composition and flavor than rapeseed due to the reduction in erucic acid. Canola is grown in the northern U.S. and Canada.

Canola comes from rapeseed plants, yellow flowering plants that are part of the mustard family (Brassicaceae,) which also includes turnips, cabbage, mustard greens, broccoli, and kohlrabi, and which all contain some erucic acid. Note: Rapeseed oil has been and is still used by people around the world for cooking, even with its high erucic acid content with no apparent health issues.

Canola is a combination of mono and poly-unsaturated fats. It is a source of ALA (alpha-linolenic acid,) an omega-3 fatty acid and a source of omega-6 fats as well. Both omega-3 and 6 fats are needed for optimum health. Canola oil has a healthy 1:2 ratio of omega-3 to 6 fats.

Most vegetable oils are highly processed
Vegetable oils in general, and the processing of those oils specifically, are areas of concern for many people.  Most commercial vegetable oils on the market are mass-produced using hexane, a chemical solvent which cheaply and efficiently extracts the oil. These oils have been stripped of all nutritional components that would adversely react with heat and contain chemical preservatives that may be carcinogenic like BHT or BHA. Commercial oils are neutral in flavor and shelf stable. Some folks refer to these oils as “white oils” meaning they are stripped of all nutrients just like white sugar and white flour and, because of the processing methods may contain potentially harmful by-products that could contribute to health issues especially if used in large quantities.

Vegetable oils and processed foods
Vegetable oils like canola are present in many processed foods. A steady diet of processed foods has been linked to many health issues such as obesity, diabetes and inflammation, to name a few.  Eating a diet rich in fresh, non-processed, whole, organic foods will improve your health overall and greatly reduce your risk of disease.

The vegetable oil, processed food, and omega-6 problem
Vegetable oil consumption is at an all-time high in the U.S. due to our overreliance on processed food products. Vegetable oils are high in omega-6 fatty acids which, although needed by our bodies for proper functioning, can, in high concentrations, disrupt the delicate balance between omega-3 and omega-6 fats contributing to inflammation and other health issues. For optimum health, the right balance of omega 3-6 is needed in a ratio of 1:2-1:5.

Vegetable oils and inflammation
Poly-unsaturated vegetable oils, because of their molecular structure, are unstable meaning they can easily become rancid, producing free radicals which leads to cell dysfunction and inflammation. Oxidation of oil is caused by heat, light, oxygen and moisture, all of which can occur during the processing and refining of these oils.

90% of non-organic canola is genetically modified, contributing to another set of health and environmental issues.

Oryana offers a selection of non-GMO, organic, expeller pressed oil including canola in both refined and unrefined versions.

In all oil production, nutrients are lost or diminished, but organic oils are produced without the use of chemical solvents, bleach or added toxic chemicals.

Unrefined oil is simply pressed, filtered and bottled so these oils retain many nutrients. They are aromatic and flavorful and used in low or no heat applications. They keep longer with refrigeration. Refined oils are processed to remove most of the nutrients, producing a bland tasting, odorless oil used for high heat applications.

Organic oils are not mass produced but produced in smaller batches so are fresher and of higher quality. Oryana offers a line of high quality Spectrum products, which assures its customers that their oils are organic and/or GMO free through third party testing and certification.

Oryana prides itself on offering high quality oils produced sustainably as well as many other quality fat options for cooking or baking such as butter, ghee, coconut oil, palm oil or olive oil to fill diverse diets and life style needs. As with so many things in life, moderation is the key. Limit your use of refined oils as they offer little nutritional value and use a variety of good fats for your cooking and baking needs.