It’s time to start thinking about your Thanksgiving side dishes. You probably have family favorites that you make every year but here are a few other recipes for inspiration. Maybe one of these will make it onto your family’s list of favorites! 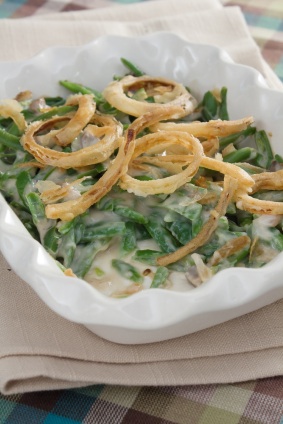 Adapted from Martha Stewart
Forget the canned mushroom soup and canned green beans. Except for the fried onions, this is made from scratch.

This salad is as beautiful as it is delicous.

Whisk first 4 ingredients in a bowl. Slowly drizzle in oil while whisking. Add salt and pepper to taste. Place lettuce, apple, pomegranate seeds and walnuts in a large bowl. Pour in vinaigrette and toss to coat. Garnish with blue cheese. Serves 4.

Kale with Carmelized Onions and Almonds

Kasha Stuffing with Cranberries and Walnuts

This is an outstanding sweet potato dish, not like the one with mashed sweet potatoes and marshmallows on top. This one is a keeper.