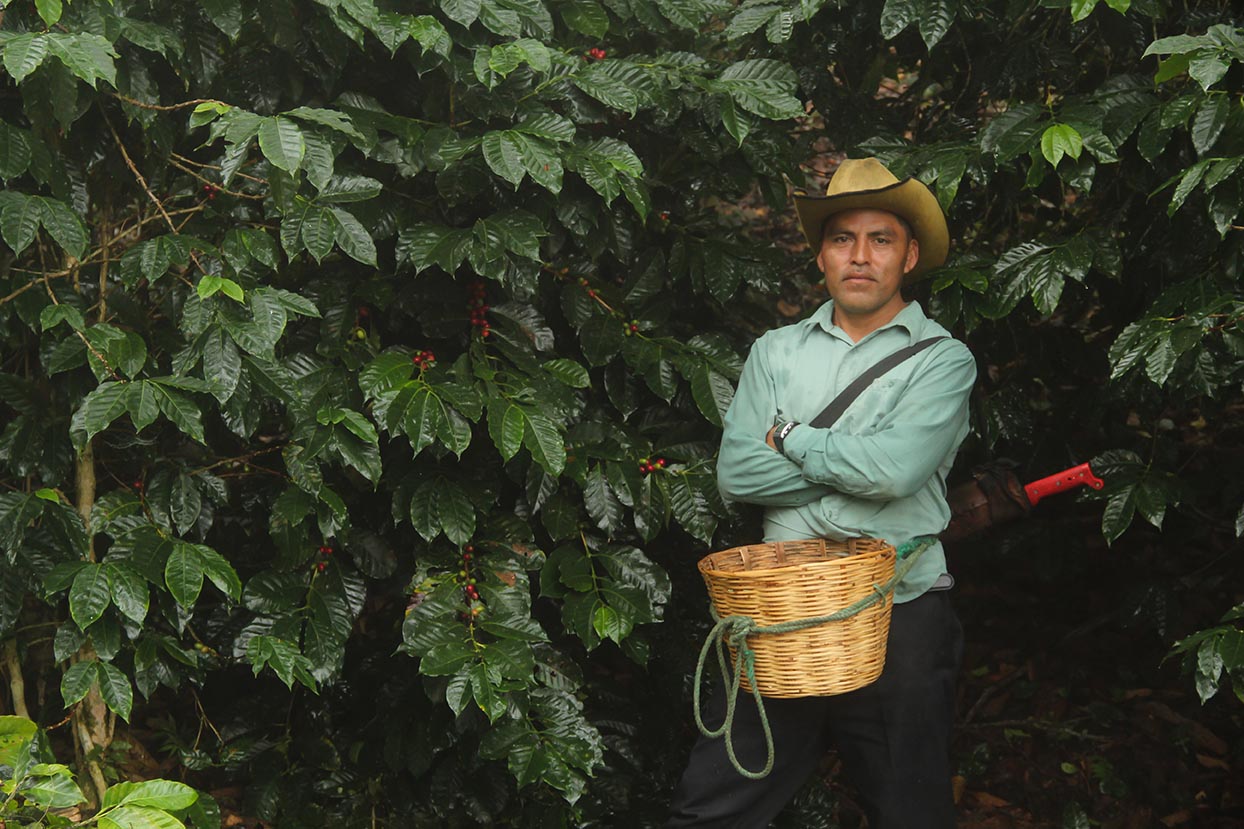 For several months now, Higher Grounds Trading Company has had the honor of hosting our partner farmer Jose Perez Vasquez of the Maya Vinic cooperative in Chiapas, Mexico–the very co-op that inspired us to start Higher Grounds–for an extended visit. Jose’s extended visa allows him to learn about the U.S. specialty coffee market, including barista and communications training, and share his perspectives with those who have enjoyed coffee from his region for years. This interview is part of a series highlighting Jose’s knowledge and perspectives as a coffee farmer as well as his experiences during this roaster/grower exchange.

In recognition and celebration of National Co-op Month, we asked Jose about what it means for him to be a member of Maya Vinic.

HG: Tell us about the history of your cooperative, Maya Vinic.

Jose: Maya Vinic was founded in response to violent events that occurred in my community following the Zapatista rebellion in defense of indigenous rights in 1994. Following the uprising, local political and military officials encouraged the formation of anti-revolutionary paramilitary groups, who roamed the countryside intimidating farmers, driving them off their land, and killing people they accused of sympathizing with the rebels. For a long period, we were unable to work our plots because of the risk of being detained and killed by paramilitary patrols. This period of repression culminated in an infamous massacre committed in December 1997 in the town of Acteal, in the area where I live. Forty-five people attending a prayer meeting were shot dead by paramilitary members. The victims included 15 children and 21 women, four of them pregnant. 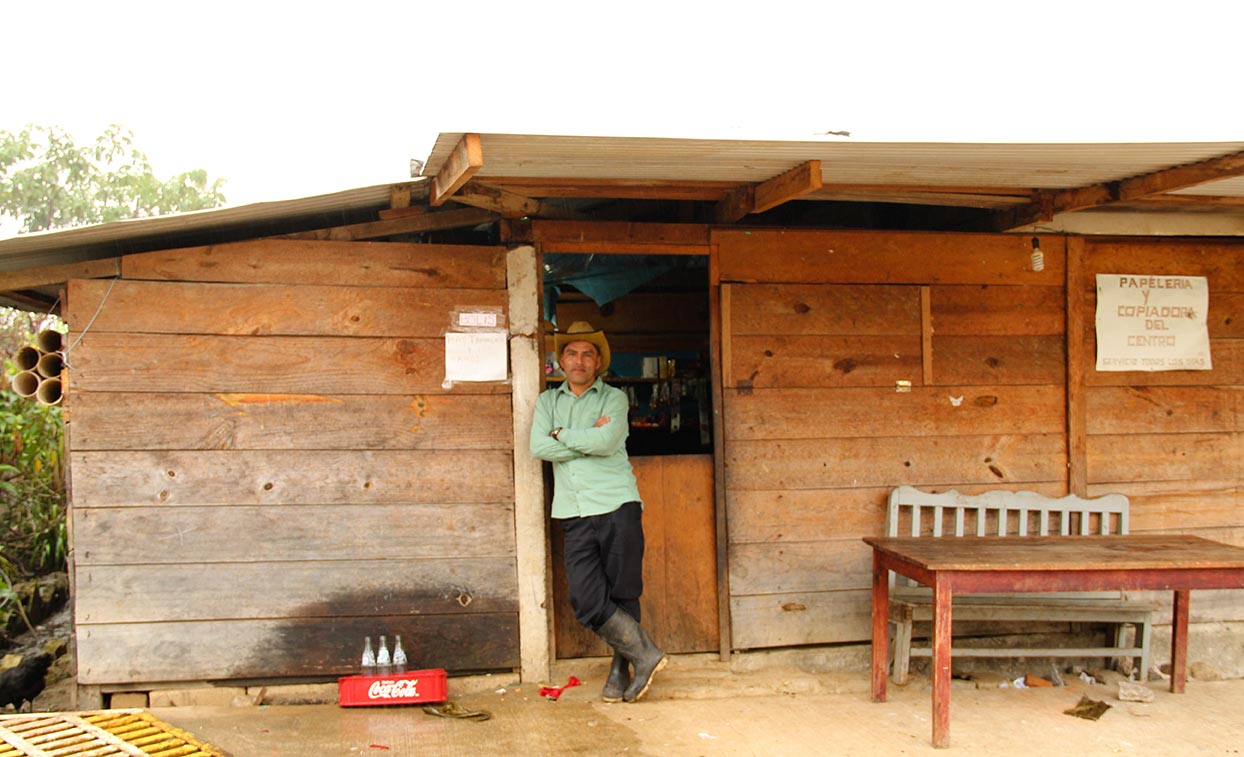 HG: Can you talk a little more about those individuals? Who were they, and why were they targeted?

Jose: All of the victims belonged, like me, to the Tzotzil indigenous group and to the pacifist social organization Las Abejas, which sympathized with Zapatista demands of respect and equality for indigenous communities but disagreed with the Zapatistas’ use of military force.

HG: How did this awful event motivate your community to form a cooperative?

Jose: Following the massacre, international observers and volunteers began to arrive in my area of Chiapas, allowing us to return to work in our fields. We began to discuss the idea of a co-op as a means of improving our living conditions, and we founded Maya Vinic in 1999. Jesuit priests who had come to work with our community helped us gain legal status for the coop in 2000. We have to give thanks to those who died in Acteal, for their blood gave us the strength to organize, to face new experiences, and ultimately to found our coop. 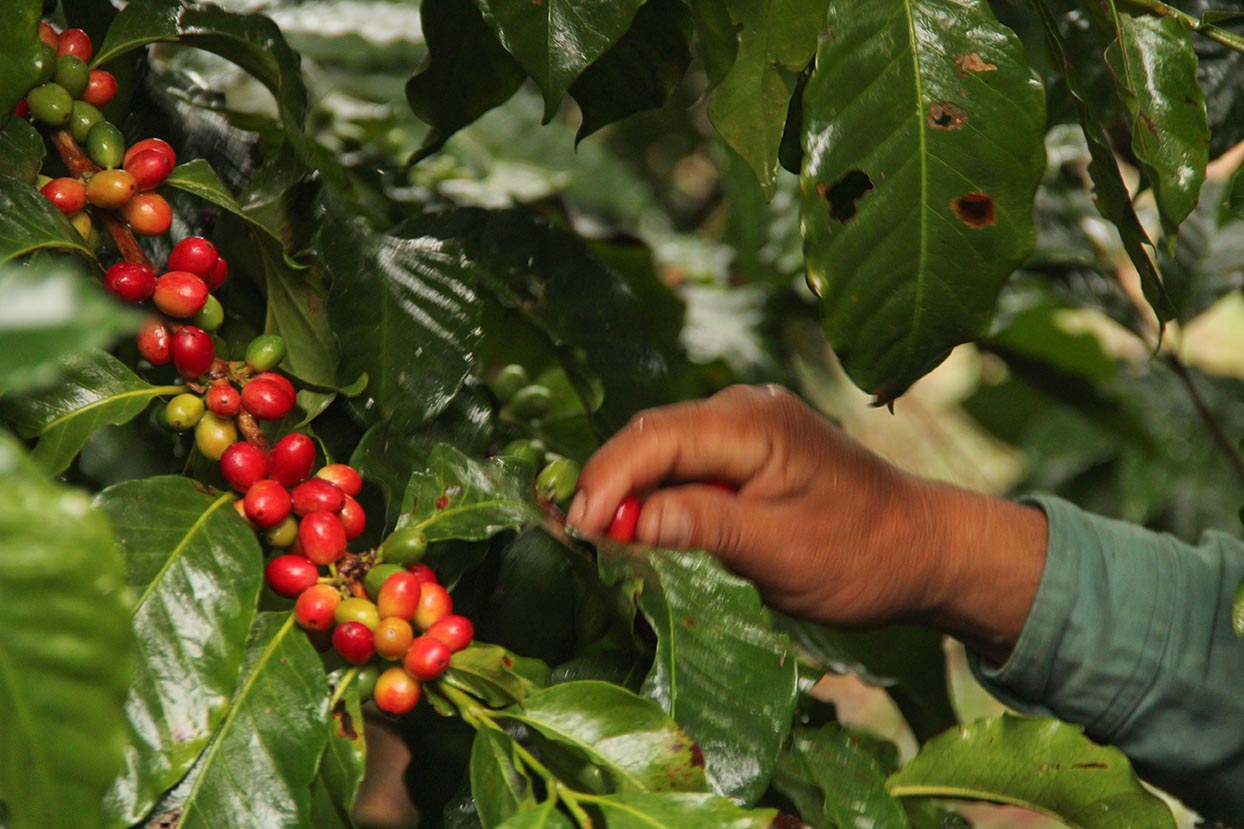 Jose: Following Acteal, it was difficult and painful for people in my community to renounce revenge and to dedicate ourselves to organizing and to working peacefully to improve our lives. But I and many of my family members and neighbors worked to educate and unite the community, and all of our success is due to our choice of non-violent methods. The Maya Vinic coop is the main instrument of that success.

HG: How has the cooperative structure strengthened your community?

Jose: While the events of Acteal spurred the creation of Maya Vinic, the more general reasons for adopting the coop model are economic and environmental. In Chiapas coffee farmers who are not in co-ops have to depend on many commercial middlemen, known as coyoteros, who are not really producers themselves but who merely take advantage of the farmers’ ignorance about the international coffee market.

HG: What do the coyoteros do? 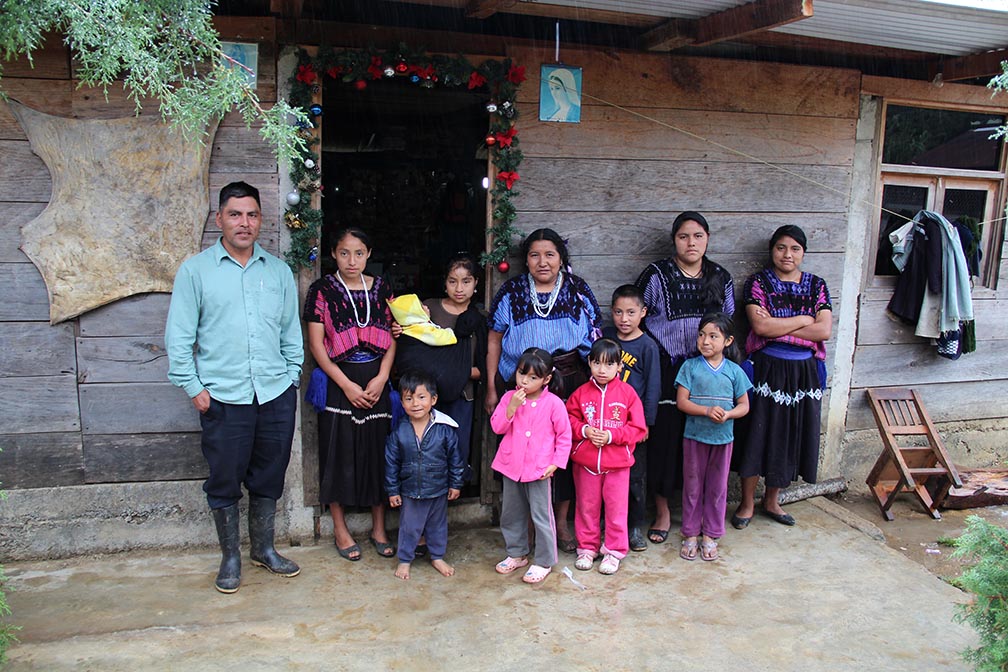 Jose: They deceive and manipulate farmers by paying a very low price for the coffee that has cost them so much work and effort to produce. In Chiapas, coffee farmers are often so cut off from information about current coffee prices in the U.S. and other foreign countries that they have no choice but to accept the very low prices offered by coyoteros for their beans. The coyoteros not only lie about current prices, but even about the final use of the beans, telling farmers that they are going to be used for medicine or for dying clothes, so as to keep them ignorant of the real market.

HG: Have you sold your coffee to the coyoteros?

Jose: Before the creation of Maya Vinic, I had to deal with coyoteros and experienced the pain and anger of seeing them use their own unreliable scales and their own deceptive calculations to cheat us and to steal kilos of coffee from us. Before the coop, there were no alternatives for bringing coffee to market, since roads were very poor and large towns were hours away on horseback. At one time, farmers in my community gave up on producing coffee because we were so badly paid for our work.

The coyoteros don’t care about the quality of the coffee or the presence of contaminants from chemicals used as fertilizers and pesticides and for processing the coffee. All that matters to them is the volume of coffee available, since they profit by buying large quantities to sell for export. Awareness among small coffee producers of these problems with the coyoteros led us to create our Maya Vinic in order to maintain our dignity and to obtain more benefits from what we produce.

Jose:  Organic farming allows us to protect our environment, since the use of chemicals depletes the soil and makes it less productive over time, which is very sad for us to see. Chemicals also wipe out wild plants that we use for medicinal and other purposes.

We use farming techniques learned from our parents and grandparents, using hoes and machetes. These allow us to work as our ancestors have worked for centuries, without polluting the land. The use of chemicals has produced sometimes fatal health problems for field workers in Chiapas, and health issues are especially serious when the nearest hospital is hours away from our community and very few farmers have cars to travel there. The co-op’s decision to rely on traditional organic farming methods has alleviated these problems.

HG: How does the cooperative sustain your community economically?

Jose: The good price that we obtain for our coffee translates into profits that we share equally between hundreds of coop members at the end of every harvest season. This is the advantage and the importance of being a co-op member.

HG: Are there any other benefits of your membership in a cooperative?

Jose: The coop has brought us success and good harvests and a better standard of living for our families. If it didn’t exist, we also wouldn’t benefit from the long-distance communication we now enjoy. Today, thanks to the coops founded by the small producers of organic coffee in Chiapas, we have been able to build a bridge for direct communication between producers and coffee consumers. We have gained the opportunity to learn about what happens to our product after we sell it and how it is consumed in places like Traverse City. I’ve been able to share my knowledge about farming and about the coffee business with other coop members, and I’ve even been able to travel to other countries to speak about the work of Maya Vinic. There I’ve met and become friends with the people who buy and consume what we grow. These are opportunities that I would never would have had outside the coop model. In my community, it has opened our eyes, our hearts and our mouths, allowing us to speak as equals. Our co-op relationships allow us to show our customers where the product they drink comes from, how it has been made and brought to them, step by step and process by process, so they that can enjoy a good sip of healthy coffee.

HG: We’re honored to have been the first international buyer of Maya Vinic’s coffee. Thank you for your longstanding partnership! 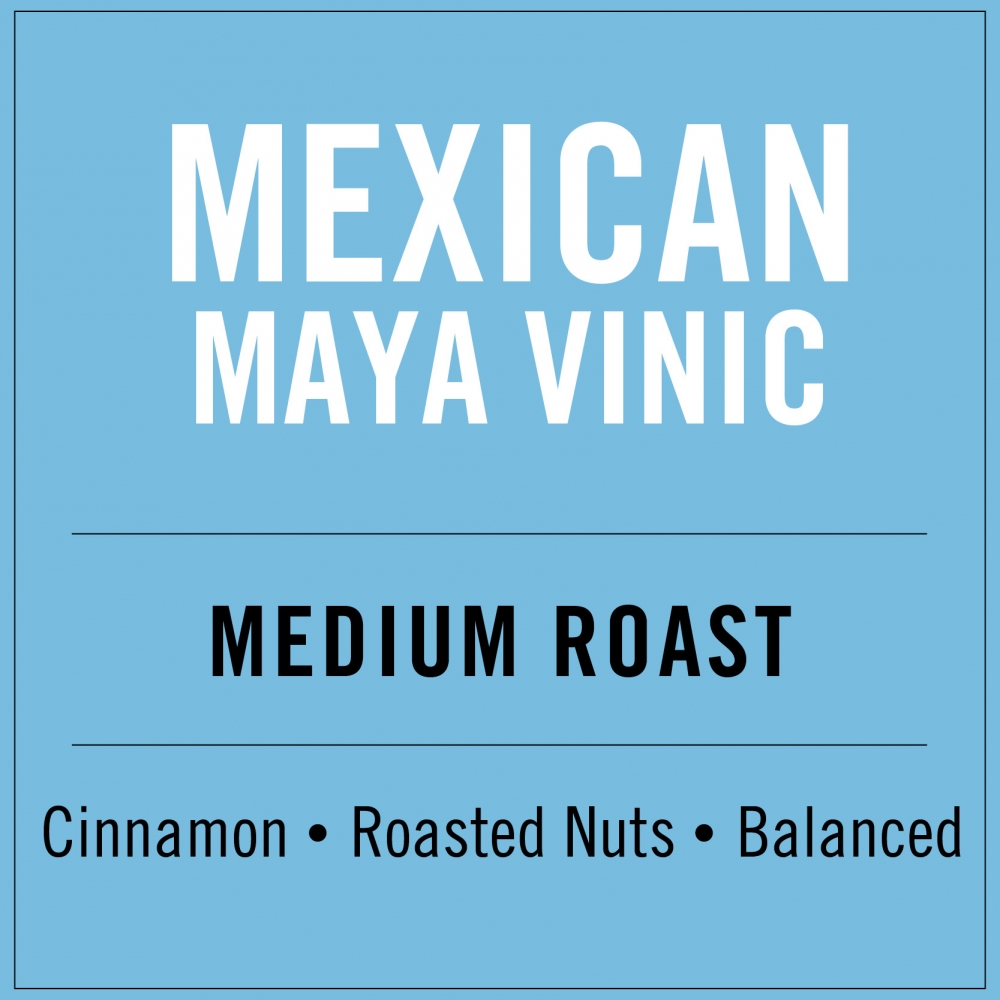 Jose: For Maya Vinic, Higher Grounds is one of our most important partners and a true friend. They were one of the first buyers who allowed us to sell directly to a foreign market without going through coyoteros, and they remain one of the most committed to collaborating to help develop our communities and improve living conditions for our farmers. Higher Grounds has supported us not only by buying our coffee consistently for years at a very fair price, but also by funding development projects through the On the Ground. On the Ground has brought potable water to more than 4,000 people in more than a dozen communities in Chiapas, including Aurora Esquipulas, Yaxjemel and Acteal. Before, community members often had to walk several kilometers a day to carry water from natural springs, but now they have access to taps and washing places located near their houses and supplied by permanent tanks. We have a strong connection with Higher Grounds, and we intend to maintain it for a long time to come.