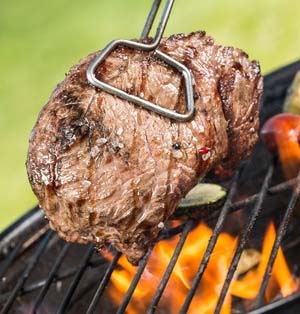 Did you know that grass-fed meat not only tastes great but is also nutritionally superior to grain-fed feedlot beef? Animals raised exclusively on grass produce meat that is high in omega-3 fatty acids, a nutrient that is lacking in the standard American diet. The meat of grain-fed animals, even those that were initially raised on grass but then transferred to feedlots to be fattened on grain lose their stores of omega-3s.

The meat from grass-fed animals is also the richest known source of another type of good fat called "conjugated linoleic acid" or CLA. When animals are raised on fresh pasture alone, their meat contains as much as five times more CLA than products from animals fed conventional diets.

Grass-Fed is Lower in Fat

Grass-fed beef is lower in fat, which means it can dry out or become overcooked more quickly than grain-fed beef. So the goal is to keep the meat moist.

Grass-fed beef cooks faster than grain-fed, so use a lower heat setting on the stove or grill and use an internal thermometer to check for doneness. Remove from heat when it’s 5 degrees below the desired temperature, cover loosely with foil, and let it rest 5 minutes. During the resting period the internal temperature of the meat will continue to rise.